An engineering marvel, the history of gutters goes back to the middle ages when these troughs started protecting buildings from rainwater.

Your rain gutter is an important part of keeping your home and lawn damage-free. Most people forget about their gutters until something goes wrong. Which means their long, interesting history goes unnoticed.

Around 3000 BC, early civilizations used gutters of burnt clay and brick as a primitive sewage system. This protected their homes from damage. It is also the earliest design of what would become the modern gutter we know today.

The Roman Empire employed a similar system which sloped the roads to funnel water to the sides and used the furrows to wash the runoff away. While still not attached to homes, the basic design persisted when the Romans brought it to Britain in 47 AD.

Gargoyles Instead of Downspouts 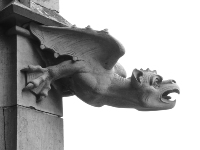 In the Middle Ages, the Normans introduced lead gargoyles to England.

Heavy stone, these decorative features gathered water from sloped roofs and “spit” it away from the structure.

Some modern devices revive this form of water dispersal.

The Tower of London Innovation

In 1240, King Henry ordered gutters installed on the White Tower at the Tower of London, to keep the walls white. A gutter carved from a single piece of lumber made its first appearance.

They were also the first to have downspouts to prevent the water from blowing onto the walls. Instead, downspouts channeled water into underground systems.

As homes grew closer together, installed rain gutters became more common. Mostly made from stone (lead or clay) or long pieces of cedar. Due to weight and scarcity, neither proved ideal for houses.

Cast Iron and the Colonies

In the 1700s cast iron became a popular material in Europe. It presented its own problems. Being heavy and easily shattering if dropped, it fell out of favor as lighter, stronger materials made their way onto the market.

In America, softer woods replaced cedar. Two boards formed into a v shape were lined with zinc, lead, or another insulating material to preserve their lifespan.

People considered the shape pleasing to the eye. Between the aesthetic and the functionality, this style stayed popular for a long time.

The History of Gutters in the 20th Century

In the early 1900s steel was prevalent. U.S. manufacturers invented machines that rolled the metal into half-round form, easily attached to roof fascia.

World War II saw advances in many materials, including plastic. Other materials available at the time included copper, aluminum, galvanized steel, and asbestos cement. Each had its own strengths and weaknesses.

Asbestos cement presented environmental hazards and fell out of popularity quickly. Plastic and aluminum became most popular because of their weight and durability.

During this time period, seamed gutters became popular due to its easy installation.

The return of the seamless style meant a reduction in leaks, clogs, and tears. Combined with the lightweight and durability this became the most popular style and remains so to this day.

Now that you know the history, your neighborhood experts at Gutter Tex would be happy to explain how these updates can protect your home.